Local and European Elections and Getting lost in the same old story.

So, Ireland has had a bad run of late. Emigration and homelessness are up, there is widespread opprobrium over the continued inefficiency of the state bureaucracy along with a (hardly exclusive) commitment to neo-liberal economic policies have bred widespread dissatisfaction and anger, lots of anger.

So much so that 'Why aren't we out rioting like the Greeks' has been a question sincerely addressed by various excitable parties. None of whom seem to have recognised the obvious answer; That it would be a ridiculous and counterproductive course of action.

Why is it a terrible idea?

Well the answer to that is long and boring and requires participation in one of humanity's least popular pastimes, criticial thinking. It takes time and consideration to figure out the economic and social repercussions of the pursuit of an evidently viscerally satisfying violent lashing out. And importantly, it also requires swimming against the tide of our most primitive emotional responses and our constant attraction to imposing narrative interpretations of the wold that complement our maladjusted instincts.

As a result, the answer to the question of 'Why not riot?' is pitched into a David vs. Goliath battle against the immediate reaction of it being 'in favour' of the enemy, the bad man, the monster, whatever.

In short our binary narratives of Good/Bad, predator or prey, hero or victim don't quite fit the world.  So if I listen to the voice saying go and tear down the Anglo Irish Bank building I'm ignoring the damage this will cause in terms of economic activity which we depend on as part of our social ecosystem and at a baser level in terms of the assumed security on which our entire non-subsistence culture rests upon.

We take for granted the notion that we can travel a few short kilometres into the city with no expectation of being attacked, robbed or killed, and that if that does happen it will be an exception.

If we can't take that for granted, we lose everything that makes us better off than every single one of our ancestors.

But the kind of stories we tell ourselves about the world don't leave room for this, it simply takes too long to explain a complex ecosystem and it's various interacting parts and the potentialities involved.

Seeing Greeks riot from a safe distance, speaks more directly to us in a weird, not a material threat and simultaneously a satisfying (for some at least) way, the image of 'heroic' citizens taking their fight to the man: It also speaks directly to the sort of narratives that extreme fringe parties on both left and right trade in, 'all questions will be addressed after the revolution'. Just do this one big thing and then everything will be awesome.

So how does this connect to the title of the post?  We're not rioting, probably down to the fact that our state bureaucracy has long functioned far more efficiently than the Greek one, not to say it isn't deeply flawed, but no one has starved to death around here in a while.  Buuuuuuuuuuuuuuuuuuuuut, buuuut, buuuut, we still look for the same fantasy narratives, whether it's socialist Frodo on an epic quest (not a comment on Paul Murphy MEP's height, besides I'm sure he more envisions himself as Socialist Aragorn) or the magical offshore treasure that the evil Sorceror is stealing away.

We gobble these easy stories, but because they don't reflect the complexity of the world they make for a very poor foil to the very real and complex bad stuff that's going on.

In the recent elections we see a massive swell of sentiment towards voting for candidates who will either stick it to the face of the 'man' or who are themselves selling the impossible live up to hero narrative (just ask Barak Obama, or read the whole book about it by noted American Sociologist Jeffrey Alexanderl, then loan it to me because I can't afford it right now).

So we get people rushing to vote for the guy with the stylish black and white headshots of him staring coolly into battle, or the party with the line about, no one's ever elected us before but trust us we're magic (most notably they've got a great trick with disappearing things). And if they have any intellectual ethical quandry about it, they justify it to themselves or others as being to send a message to the established body politic?

And the message is?
1. Be more populist...so you know, like pretend everything's good with a housing bubble and just keep hiring economists who'll tell you what you (and the public) want to hear, because that's never been a problem...and certainly not in the recent history of the state...*cough*

2. Pay less regard to boring old 'rules' and so called 'rule of law' in particular since that gets in the way of getting things done (Because every good government has a renegade action movie cop as their spirit guide).

3.  We like extremists, so be sure to take more extreme positions if you want our vote.  Also, it doesn't matter how ridiculous you are, if you say things that we find briefly emotionally satisfying we'll send you all the way.

4. We care so little about cohesive national policy that we'll just vote for people who don't even have a vaguely sane party line to follow.

5. Don't bother with thinking hard yourself, sure we can't even hear that.

So, yeah. Great job team. This'll really fix the political establishment, especially all of those problems about informality and rule evading (elected representatives making deals with developers on the golf course), inefficiency and gombeenism are surely on the run. 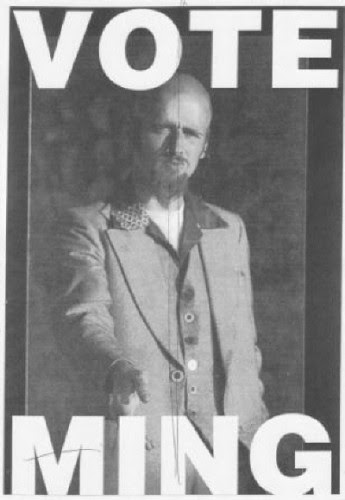 Or, maybe, just maybe it's a bad idea to encourage the next generation of politicians to be more idiotic. Because, most of the bad stuff they (sorry politicians but I'm generalising in spite of my own argument) do is down not to chair swiveling, cat stroking villainy but rather a potent stew of intellectual inadequacy of effort...and maybe talent mixed with institutional inertia and a powerful electoral bias towards parochial concerns.

These are things that can't be addressed by rioting, or by voting for protest candidates (I'm not saying they shouldn't run but like everyone else, they should actually offer some value to society) or just minding your own patch by voting for Jonny Local-Issues because your patch isn't where the water gets into the garden.

I want to know that my T.D. (Parliamentary Deputy) understands the technical issues involved in government and can actually explain what things like capitalism and socialism mean (i.e. not fairy stories or oppositional narratives), how do I find that out?  I do the thinking and the reading, and the research that I need to have an understanding beyond my personal daily experience and then I approach my candidate and ask him or her difficult complex questions, and make my decision based on both the ideological appeal and the technical validity of what they are saying.

And now, after a bummer of a post that probably offended everyone, here's a picture of someone staring heroically in black and white to make us all feel better.